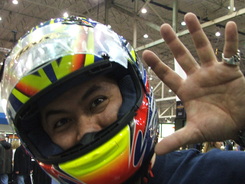 Robert is the owner of The Service Pavilion.  He has been riding motorcycles from a very young age and grew up racing flat track racing all over the U.S.  He raced professionally in the Grand National Flat Track Series until his retirement in 2000.

His desire to stay in the motorcycle industry led him to work at Arai helmets until 2002, when he decided to make "The Service Pavilion" his own, selling Arai helmets, parts, and accessories to consumers.  He is extremely passionate about helmet safety and proper fitment.

Robert enjoys all types of riding but in recent years has developed a love for Mini Moto road racing.
Dennis Miller 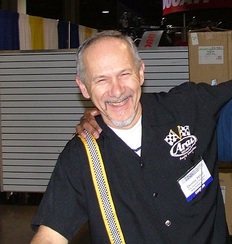 Dennis is the head mechanic at The Service Pavilion and also experienced in Arai helmet sales.  He has 40+ years of experience working on bikes of all brands, though he personally is a Yamaha guy at heart.

He is also Robert's father, and has been with The Service Pavilion from the start - initially on a part-time basis, until he was brought on full-time in 2004.

Dennis enjoys going for multi-day trail rides with his buddies when he can get some time away from the shop. 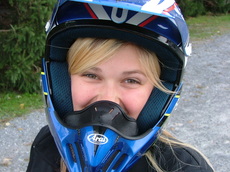 Brianna Miller is the "jack of all trades" at The Service Pavilion.  Her primary position is in sales and customer service, but she also does bookkeeping, shipping, receiving, website design, and handles the eBay store.

Brianna did not grow up riding motorcycles and actually knew nothing about the industry before she started working for The Service Pavilion in January of 2005.  In the years since, she has gained loads of knowledge about Arai helmets, and was even nominated as MPN's "Dealership Superstar" in 2011.

She has worked at learning to ride a motorcycle, and despite not yet being a confident rider, she does enjoy older motorcycles.  She has both a 1972 Honda CT-70 and a 1965 Honda Sport 65.  Her dream bike is a Ducati Monster.  However, Brianna still feels most comfortable on 4 wheels, which is why you can find her riding her "Mario" go kart when she can find the time, since she is a bit of a workaholic.  In addition to working at TSP, Brianna runs 2 small businesses of her own.

Brianna is also the wife of Robert Miller, whom she married in 2011. 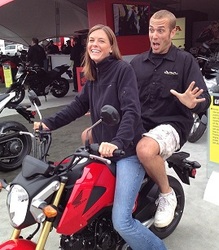 Paul Lynch can be found at numerous events that The Service Pavilion attends throughout the year. He can often be found at Moto GP races with us, and at bigger events, such as the NYC motorcycle show.  He specifically focuses on Arai helmet sales, and is very knowledgeable with the product line.

Like Robert, Paul also grew up racing Grand National Flat Track, so he has loads of experience not only riding, but wearing Arai helmets as well.  He has since retired from professionally racing, but can still be found riding and racing on occasion.

Also, in his spare time he can be found participating in bicycle races, both on the road and in the mountains.  He also loves to spend time jet-setting around the world with his wife, and spending time with their two dogs. 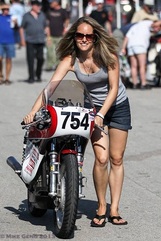 Kerry Smith is also a member of TSP's sales team at events, and can most often be found working at the NYC motorcycle show and/or the Moto GP races with us.  Kerry is super friendly and great at helping customers to determine exactly what they need in an Arai helmet.

Kerry has been riding motorcycles from a very young age and currently participates in Vintage Road Racing.  She was even selected to participate in a race in Philip Island, Australia earlier in 2014.

Kerry is happy to talk to other riders and swap stories about their experiences riding and racing. She is an adventure seeker and has recently taken up surfing, which is something that she and her boyfriend enjoy doing together whenever possible! 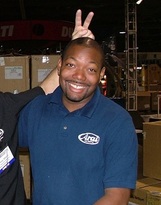 Kareem Stanley has been with The Service Pavilion for many years, and is also part of our sales team at events.  He has been to countless events with us over the years, though as a native of Miami, he prefers the events that are in warmer climates.  Kareem is known for his great customer service and taking time to really listen to the customers to assess exactly what they need.

Kareem has been riding for 15+ years, and is passionate about Ducatis in particular.  He prefers to ride and race on asphalt, but is known to give dirt riding a chance every so often.

Kareem has a fairly demanding full time job, but in his spare time can be found spending time with friends and/or watching college football games (sometimes up to 3 games at once)!